(Amy says goodbye to Betty our jeep, in Portsmouth, RI)

Today we dropped our jeep off at Pirate Cove Marina in Portsmouth, RI, Sequel’s new home. So now we’re committed – the only way we can get that sucker back is by taking the long route – specifically, by flying to Miami, driving to Jupiter, then boating 1,400 miles north. Well, we could also just ask friends to drive us back down to RI, but there’s no fun in that.

And here’s our slip – B3. Well, there’s a squatter in there right now, but give it a few weeks…

(Thanks for the lift back home Jon and Lisa!) 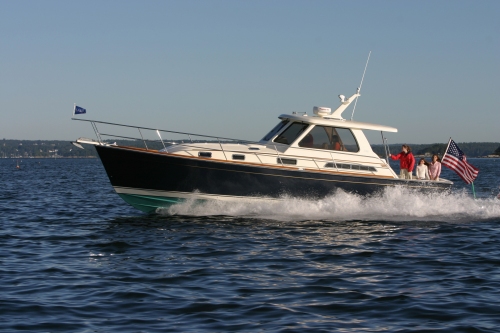 (The above picture is of a sistership to Sequel. As you’ll read below, we’ve only seen Sequel in person for a matter of hours…)

Okay – so the stage has been set with the first post, ICW 1, but before I can even begin the story of our journey (which, as of this moment is still in front of us), I’d be doing the story an injustice if I didn’t first introduce the boat that is a new part of our family. Sequel is a 2006 Sabre 38 Hardtop Express, built by Sabre Yachts in Casco, Maine. She’s a downeast style cruiser, with a 38′ length at the waterline – about 43′ in length overall. For power Sequel has a pair of 380HP Cummins QSB5.9 electronically controlled, common rail diesel engines that give her a top end of about 30 knots, operated by a TeleFlex drive-by-wire throttle and shifter system. She carries 350 gallons of fuel, 100 gallons of water, oh and 40 gallons of “black” water – three capacities we’ll need to keep an eye on during the trip. She also has an 8kW Onan generator to keep things powered up while on the hook, including four separate air conditioning systems to keep things cool.

Leading down five steps from the helm deck is an interior that is very nicely laid out for a couple on an extended cruise (I’m beginning to sound like a sales brochure), and can easily accommodate guests, as the salon table lowers so that the addition of filler cushions the salon converts into a guest room. We like that there’s a built in wine rack in the salon too – I’m telling you, this boat was designed for us!

The helm deck has a pair of (very comfortable) Stidd helm seats, along with an L shaped settee with a beautiful pedestal table. The Stidds can pivot aft and lower to face the settee, and there’s a second ‘fridge, ice maker and sink here so we won’t have to worry about cocktail hour!

Aft and down two steps from the helm deck is the cockpit with a pair of benches facing each other, along with the required drink holders and a receptacle in the sole for another pedestal table for alfresco dining. Up three steps both port and starboard are wide side decks leading to a fairly expansive bow (perfect for sunning!), where there’s a 40 lb QCR anchor on a chain / rope rode (the length of which I don’t recall, but will no doubt find out pretty soon..).

Apart from the original setup we’ve also added the following:

– Freedom Lift hydraulic dinghy lift with carbon-fiber lifting arms. The entire mechanism is installed beneath the swim platform and is operated via wireless remote

Of course, all this (and much more) has been done some 1,500 miles from our home in Boston. The only time we’ve seen Sequel (well, she had a different name back then) was in April when we went down for the marine and engine surveys and sea trial. Still – we fell in love with her, and she’s only gotten better since then.

Following are a few images of Sequel, some as recent as yesterday (emailed to us), by way of introduction.

So that’s about it for now. Once we actually get to the boat on the 12th I’ll post some more pics of her, but this should be enough to give you an idea of our new girl.

Below is from when we were on the sea trial in April. Very much enjoyed being on the boat – luckily, since we’re about to spend a lot more time on her! 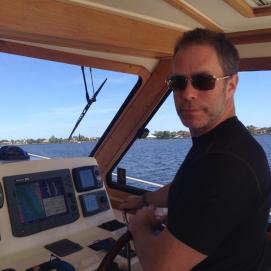 And finally, I managed an iPhone video during the wide open throttle test. On board was Amy and I, our broker (an amazing gent by the name of Peter from DiMillo’s Yacht Sales in Portland, Maine), the (previous) owner’s broker, the marine surveyor, and the engine surveyor, and she hit 32 knots. Hence my grin… (and the boat is a lot quieter then what you hear, but the engine room hatch was open to allow the engine surveyor run diagnostics on the engines.)

Next up in ICW 3 I’ll share a bit of the work we’ve been doing getting ready departure day.

Somehow, during the course of this spring, while I was developing the outline for Into the Devil’s Throat as well as working on getting an audiobook in the works for Out of Hell’s Kitchen, my wife Amy and I ended up purchasing a boat. And not just any boat – but the boat we’ve been in love with ever since the first of her kind rolled out of the yard in 2005 (no small thanks to Peter, our boat broker from DiMillo’s Yacht Sales in Portland, Maine). Her name, naturally enough, is Sequel, a 2006 Sabre 38 Hardtop Express. She’s currently in Jupiter, Florida and Amy and I will be flying to Florida in less than a week to begin a 1,400 mile voyage to bring Sequel home.

During the trip I hope to share our experiences on this blog – so that even though I may not be working on my sequel, I’ll be working on the Sequel none the less.

This past December I packed up a mountain of gear and drove down to cave country in northern Florida to get my MOD 1 training on my Sentinel rebreather. It was, well, challenging. Which was exactly what I wanted. Personally if a challenge isn’t difficult then it’s not worth pursuing. Though the twelve+ hour days kept me too busy to really think about shooting any video or stills, I still managed to grab a little video on the last day of diving…

Sit down, take a break from reading Out of Hell’s Kitchen, and check out this presentation I gave one diving what some people call the “Mount Everest of SCUBA diving” – the wreck of the Andrea Doria. It was quite an experience for me – one that I hope to revisit soon – and I’m happy to share it with you guys.

Enjoy and let me know what you think…