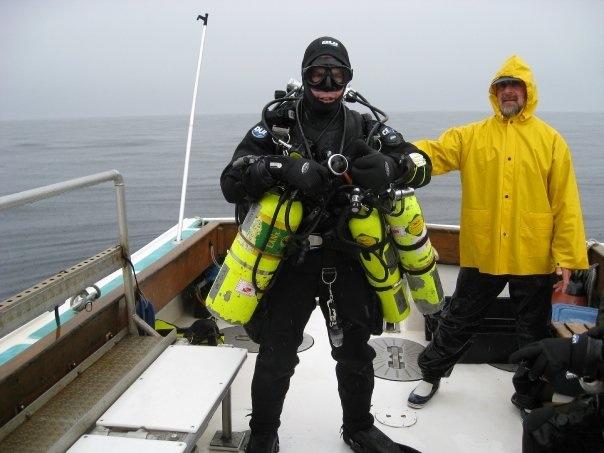 First off, as you may have noticed in the title, this is Part 2 of this story. So unless you’ve already read Part 1, or you’re the type of weirdo who likes starting a series in the middle, you may want to back up a tic and read this first…

Oh yeah, researchers from NEAq had lost four acoustical popup transducers on the seafloor, 280′ beneath the surface at the Northeast Gateway LNG deepwater offloading port. The “popup” part pf the system didn’t work as planned, and I foolishly said I could get them…

In a nutshell (heh, I guess in a way you could call my drysuit that, especially if I didn’t equalize during descent and got a good squeeze…) my plan was simple. Go to the GPS coordinates for one of the transducers, use the Interrogator to ping the targeted popup, position the boat so the range reading to the popup matches the depth, chuck in a specially made dropline, descend this line, and find and retrieve the unit.

But not so easy.

For starters, I should mention a few things about diving to the depths, and at the temperatures, involved in a dive like this recovery attampt. And note – all of these things will come into play during this dive.

For every atmosphere (33′ seawater) of depth, gas consumption (I say gas and not air because I never breath air during this kind of dive) relative to breathing on the surface goes up as a multiple of the number of atmospheres you’re under. So a dive to 280′ means nine atmospheres , so every breath I take is like breathing nine breaths on the surface (for all intents and purposes), and therefore my gas consumption is nine times faster.

Another issue many may not realize is that the oxygen found in air becomes toxic to humans at roughly 212′ (this is a rule of thumb, effected by temperature, conditioning, stress, workload, etc). What does this mean, you ask? Well, this type of toxicity effects your central nervous system and can lead to involuntary convulsions, with absolutely no warning. And convulsing under water is something to be avoided – you could spit out your breathing mouthpiece and drown, as an example. Suffice it to say, breathing air past 130′ starts to become risky with regards to oxygen toxicity, which is one key reason why 130′ is considered the depth limit for recreation divers.

Great – so air’s not an option for deep dives.

So what DO you breathe at 280′? Well, the simple answer is you reduce the percentage of O2 until its partial pressure at the target depth (280′) is 1.3 atmospheres absolute (ATA). This works out to around 10% O2 at 280′. But oh, guess what? You need, at minimum, 16% O2 at the surface to maintain consciousness. Meaning, what you breathe on the bottom, known as your “bottom mix”, can be deadly to you on the surface. Jump off the boat with a nice full tank with10% oxygen, exert yourself swimming towards the drop line, and voila! You pass out and drown. Great… So you need to start the dive breathing another tank, one with enough O2% to keep you un-dead. This one is known at your “travel mix”.

But that’s just scratching the surface. I won’t go into all the nitty details (though I do love talking about this stuff!). Summing it up, to dive to 280′ I need the following tanks:

(SIDE NOTE: This all pertains to open circuit diving – dives where you have individual tanks that you breath off. I have since switched to rebreathers, which is basically your own “gas mix bartender”, allowing you to dial in the ideal mix continuously.)

– A 80 cu ft tank of 80% nitrox. Regulator also pressurized and turned off. This is the third deco gas.

-Oh, and since my back gas is trimix, meaning it contains helium, I can’t use it to pressurize my drysuit, because helium is a tiny weenie little molecule and is a terrible insulator. So guess what – you need yet another tank, in this case a 6cu ft tank of argon that is plumbed directly into my suit. And a drysuit is an absolute requirement – the water temperature during this dive got down to 36F, and you are down there for a decent amount of time.

Speaking of cold a** diving – you may want to check out this video of some ice diving I did a while back.

Did I mention decompression? Yeah, that’s the name of the game in tech diving. And deco takes a long time, with many stops and several gas switches along the way, to get you back to the surface. Ascend a prescribed amount, stop at a specific depth, turn on your next gas, purge reg, remove current reg, put in new reg, shut off and stow old reg, rinse and repeat. But NO NOT CHANGE DEPTH! Ascend too quickly and you fizz. (fizzing is bad – don’t believe me? Check my Personal Experience with Getting the Bends)

Oh, and grab the wrong reg by accident (it is, after all, pitch black and you can’t actually see the gear stowed around your body regardless) and you can O2 tox, or you become hypoxic. And then you die…

I know, I know, it sure sounds like I’m being dramatic with all this hyperbole. Sadly I’m not – this particular activity is constantly claiming lives. There’s something known as the “Three oh sh*ts” rule. You may survive the first, and even the second, but very rarely will you make it out in one piece after the third. Generally speaking, the first one most often happens even before the dive has begun, and by then the course has been set.

Did I mention isobaric counter diffusion? If you switch between a high helium concentration to a much lower one (for example, from the 30/30 trimix to 50% nitrox which has zero He) you run the risk of rapid gas exchange due to a high gas pressure gradient – aka, you can get bent without changing depth at all.

Right, enough about the boring stuff.

Let’s get back to the dive…

For this dive NEAq had to get security clearance from the operator of the deepwater port, Excelerate Energy, who also required an observer to be on board the dive boat. We would also be shadowed the entire time by the 124′ patrol vessel Gateway Endeavor. I had contracted technical dive boat Daybreaker to be the dive platform and scheduled NEAq’s dive boat Lophius as a chase boat. This dive required a ton of coordination among many assets and people’s time, which in turn gave me a very tight window of opportunity – and a lot of stress.

Speaking of people – in my job at the Aquarium I oversaw about a 100 person team of divers, but there was only one person who had the specific skills and experience to be my buddy on this dive. Michael. He was a volunteer diver at NEAq and my long time technical dive partner – we’d trained together for some five years for this kind of diving and had executed similar profiles in the past. He’s the guy I did the Andrea Doria with and we knew each other’s skills, reactions, and behaviors like they were our own. He once cut me free from a drift line in the wreck of the YF-415 at 240′, so I owe him that…

You can check out some interesting details of the YF-415 here.

So I set a date of Aug 13th for this dive and had about a month to get everything set up. Mike and I conducted dry rehearsals, walked through every step of the plan, and worked on blind muscle memory for where each specific bit of gear was located on our own rigs, as well as that of our buddy’s.

As the days progressed towards the planned dive, the New England weather steadily turned worse. An offshore storm was brewing and the seas off Boston Harbor were building. The deepwater port lies some 12 nautical miles east of Boston Harbor and when the wind gets up in any direction other than west it gets rather, um, lively.

But there was very little schedule wiggle room with so many pieces in play – if I lost this window it might not happen at all for the rest of the year. The weather was only going to get worse as fall progressed, and it was doubtful if the batteries in the popups would survive the winter.

The evening of the 12th arrived and I made my decision. We were going to do the dive.

6:00am the next morning found me at Daybreaker’s dock in her home port of Gloucester, MA, where I met up with Captain Fran, his deck hand, a safety diver, my dive buddy Michael, Randi – one of NEAq’s researchers – along with one of her interns, and the observer from Excelerate Energy. The seven of us, with the ton of gear Michael and I required, pretty much filled the boat.

Meanwhile the Aquarium’s dive boat, Lophius, was heading out of Boston with JD, the VP of Animal Care as captain, and Barb, Curator of Fishes, acting as mate.

Both boats would converge at the exclusion zone at 10:00am where we would meet the patrol vessel Gateway Endeavor.

And I had already made my first oh sh*t…

To be continued (heh heh heh)…